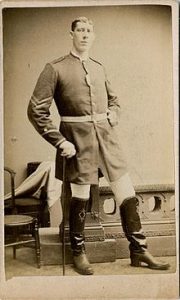 Calgary town enjoyed a circus in 1899.  It left a few days later, on their way to Edmonton, but left behind a giant of a man.  The “tallest man in the world”, Henry Alexander Cooper, had fallen ill and had to stay behind.  Known to his friends as “Harry”, he passed away in the Calgary General Hospital on August 16, 1899, surrounded by his fellow members of the International Order of Oddfellows.

Harry was born in England on June 12, 1853, in Malton, Yorkshire, to a working-class family.  As a young man, he worked in the iron mines at nearby Rosedale.  Until then, there’s nothing to indicate he was above average height.  Then Harry was stricken with a severe fever and confined to bed for 13 weeks.

“During that time he increased in stature to the enormous and astonishing extent of 18 inches,” according, in 1900, to the Northern Echo, a daily newspaper of northeastern England.  The Echo claims he eventually reached the height of eight feet eight inches.  Other sources say that his height only reached seven feet six inches, nonetheless towering over all that met him.  It is said that “his hands measured 13 inches from the wrist to the end of his third finger, and a gold ring he wore was big enough for two ordinary fingers.  His foot was 17 inches long.”

He moved to North Skelton, where he acquired the nickname of Long Harry.  He often visited the town of Middlesbrough, where he would attract swarms of street urchins.  “Trying as this must have been to Harry, he bore it with surprising patience,” says the Northern Echo, “scarcely ever turning to rebuke them or ask them their errand.”

He was known as a quiet, gentle person.  And apparently he had a sense of humour.  “As is commonly so with more than ordinary sized men, says the Echo, “Harry’s almost constant and chief companion was a little fellow only slightly over half his height.  When in each other’s company, Harry has been known to take his companion by the coat collar and, without the slightest hesitation or apparent difficulty, place him at the other side of the hedge, to the great amusement of those who happened to be near.”

His height was a hindrance when he entered the mines.  He had to bend nearly double to ride the cage down the shaft – but his great strength was an asset.  He could fill the ore carts with huge stones ordinary miners could not lift. 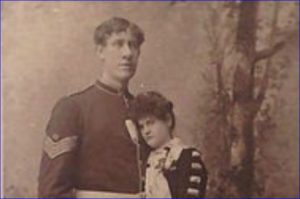 The Yorkshire Giant and spouse, Minnie

Wherever he went, his great stature attracted attention.  He refused many offers to become an exhibit at various shows, but eventually accepted an offer, and moved to Leeds.  He was no longer a poor minor when he returned to North Skelton for a visit a year later – he was dressed in a fashionable suit, a tall silk hat and high-heeled boots.

He was eventually noticed by P. T. Barnum, the American showman, and left for the United States.  To make his journey easier, a special stateroom was constructed on the steamship.  After touring with Barnum, Cooper pursued a career with U.S. circuses and dime museums.  In the U.S., he was variously known as the Yorkshire Giant, Sir Henry Cooper and Colonel H. A. Cooper.  It was all circus hype, since he was not British nobility and had no military experience.

While in the United States, Henry met and married a tall American lady with whom he had children. In 1886 an announcement was placed in the New York Clipper trade magazine stating that Minnie Cooper, Henry’s wife, had given birth to a baby weighing 17 pounds. 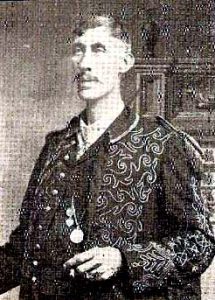 The Main’s Circus was enroute to Calgary when Harry took sick.  He was ill with catarrh of the stomach, an inflammation of the mucous lining of the stomach.  After a short illness, Harry died, surrounded by his fellow members of the International Order of the Oddfellows.

The funeral arrangements were carried out in a manner most credible to the order.  A special casket, covered with broadcloth, was constructed by Smart & Company, the undertakers. The Calgary Oddfellows undertook to perform the last duties to the memory of the deceased, and the local lodge of the Knights of Pythias assisted in the ceremony.  It was held in the Oddfellows’ hall, Clarence Block, with 70 Oddfellows and 35 Knights being present.  Afterwards, the cortege proceeded to the Church of the Redeemer “where a very impressive service was conducted by Rev. I. H. Cubitt”.

Henry A. Cooper was laid to rest in the Oddfellows’ plot of Union Cemetery, Section C, Row 8, Plot 20.