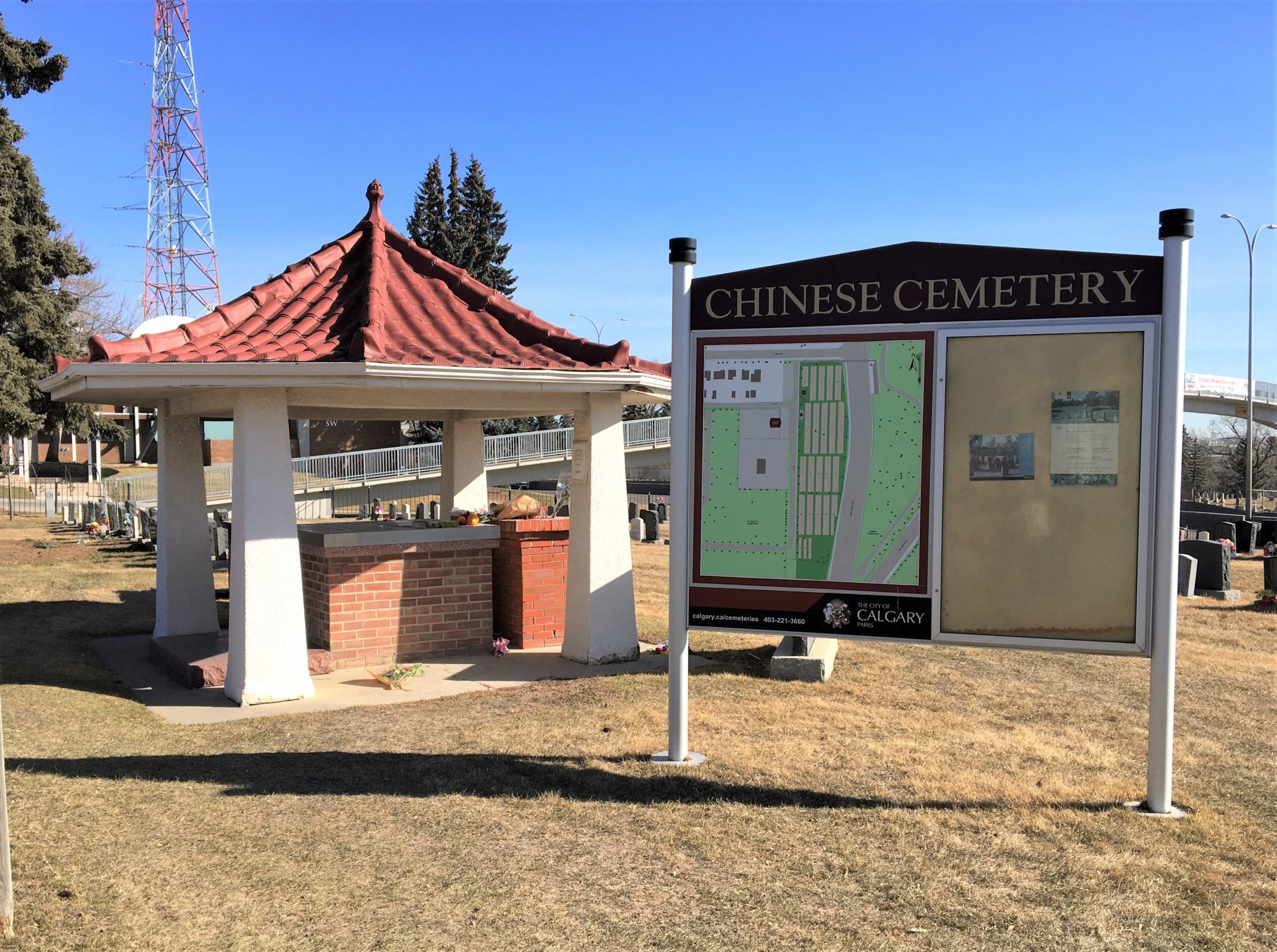 The establishment of the Chinese Cemetery dates back to 1908. In 1906, the Chinese community petitioned the City to set aside lands for the burial of members of Calgary’s Chinese community and land use was granted in 1908. The cemetery is Calgary’s smallest burial ground, at just 1.4 hectares (3.5 acres) of land. It is located between St. Mary’s and Union Cemeteries in Calgary’s Southeast, on the west side of Macleod Trail, south of 31 Avenue SW.

The cemetery includes many of Calgary’s early Chinese pioneers and features in-ground and cremation burial plots and a large pagoda. The pagoda has an offering oven, which is available for those wishing to make offerings to their loved ones. There is a large concrete and granite historical Chinese memorial. All areas within the cemetery allow for the placement of upright and flat monuments. As of 2022, there are over 1,200 interments at the site.

The City took over cemetery operations from the community in 1938. Starting in April 1950, the Chinese Cemetery was completely landscaped with the intent of becoming a permanent burial ground for Chinese who died in Calgary. The cemetery had previously been under what the City Parks Department deemed “Non-perpetual care”, an arrangement which fitted with the Chinese custom of temporary burial in Calgary and a later final burial in China. In more recent times, most Calgary Chinese were being given a permanent burial here in Calgary. The decision to place the cemetery under “Permanent care”, as other City cemeteries are kept, was made by the Parks Department after a representation of local Chinese had requested that their cemetery be kept up on a permanent basis. (Source: Calgary Herald 27 Apr 1950 page 1)

On July 3, 1957, Calgary’s Chinese community paid its last respects to one of its most prominent citizens. The deceased was Kam Chong Wong, 76, restaurant owner for more than 30 years, and a leader in the economic, social, and cultural life of the community. The funeral procession of over 70 cars and two bands, led by 5 police motorcycles, stretched over 10 city blocks on its way to the Chinese Cemetery. The tribute was a rare mixture of Chinese tradition and Christian belief displayed in ceremony, ritual and procession. An estimated 2,000 Chinese community members were present for the occasion. (Source: Calgary Herald 04 Jul 1957 page 22)

In 1980, during the Light Rapid Transit (LRT) construction and the widening of Macleod Trail, workers excavating near the cemetery unearthed 39 sets of remains just outside of the known cemetery boundaries. These burials predated the City’s management of the cemetery and no names or burial records had survived; a local Chinese clergyman officiated at their reburial within the cemetery. (Source: Calgary Herald, 15 Feb 1980, Page 48)

The Calgary Heritage Authority deemed the cemetery to be a historically significant cultural landscape that played an important part in the settlement and establishment of Calgary as a city. (Source: https://www.calgary.ca/csps/parks/cemeteries/chinese-cemetery.html)