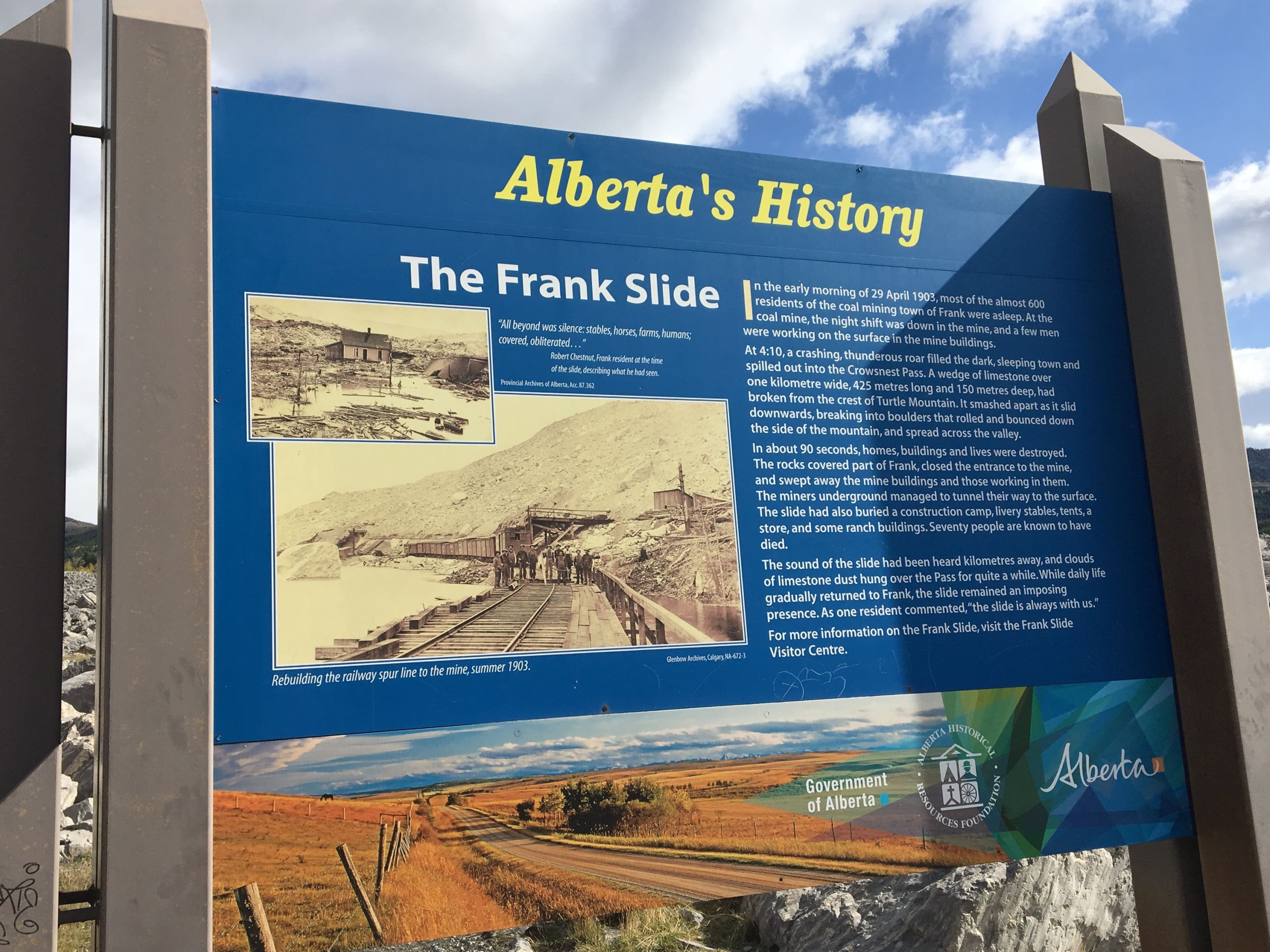 The community of Frank is located in the Crowsnest Pass area, at the base of Turtle Mountain where Gold Creek flows into Crowsnest River. Frank became the first incorporated village in the Crowsnest Pass in September 1901. By 1903, it served over 1,000 people with two dozen businesses and services, a two-story brick school, and a regional post office. In 1979, Frank amalgamated with four other municipalities to form the municipality of Crowsnest Pass. Frank is named after American entrepreneur Henry Frank who, with his partner Sam Gebo, developed the first of many coal mines in the Crowsnest Pass in the base of Turtle Mountain. Thus, like the other settlements in the pass, Frank was established as a coal mining village.

Frank’s history was forever shaped in 1903, only 2 years after the founding of the village, by one of the largest landslides in world history. In the pre-dawn hours of April 29th, at 4:10 AM, the north top of Turtle Mountain leaned out over the valley and broke off directly above the coal mine. A thick slab of limestone 400 metres high (the height of the Twin Towers), 1.2 km wide, and 150 metres thick fell through the air, hit the base of the mountain, shattered, slid across the valley floor for three kilometres, and went up the far side, covering 1,500 hectares. The eastern part of Frank, mostly residential, was buried thirty metres deep in places. The resulting blast of air from the slide caused panic among the sleeping inhabitants on the far side of the village. Many were physically tossed out of their beds and feared the End of Days had come.
The landslide buried the railroad, so for several months until a new track was built over the rubble, the local Mounties met the trains on either side and carried the mail on horseback across the disaster zone. Frank was on the western edge of the landslide, the interior side of the pass, and therefore was cut off until the replacement rail line was built. Train passengers had to take a very bumpy ride by stagecoach over the debris.

The Frank Slide was designated a Provincial Historical Resource in 1977, and in 1985, the provincial government opened a major interpretive centre in Frank that explains the Frank Slide and the coal mining history of the region. The site of the original Frank townsite is now an industrial park, and many of the historic buildings in the north subdivision are gone.

At least 7 persons died in Frank between 1901 and April 1903, but it is not known if they were all interred in the original Frank Cemetery. Frank Cemetery itself was buried by the massive landslide which filled the valley with thousands of tons of rock in 1903. There are at least 74 dead buried under the rubble and boulders.

It is curious that the citizens of Frank did not start another cemetery after the Slide. Despite the town’s continued growth, after 1903 Frank’s residents were usually buried in Blairmore’s cemeteries.