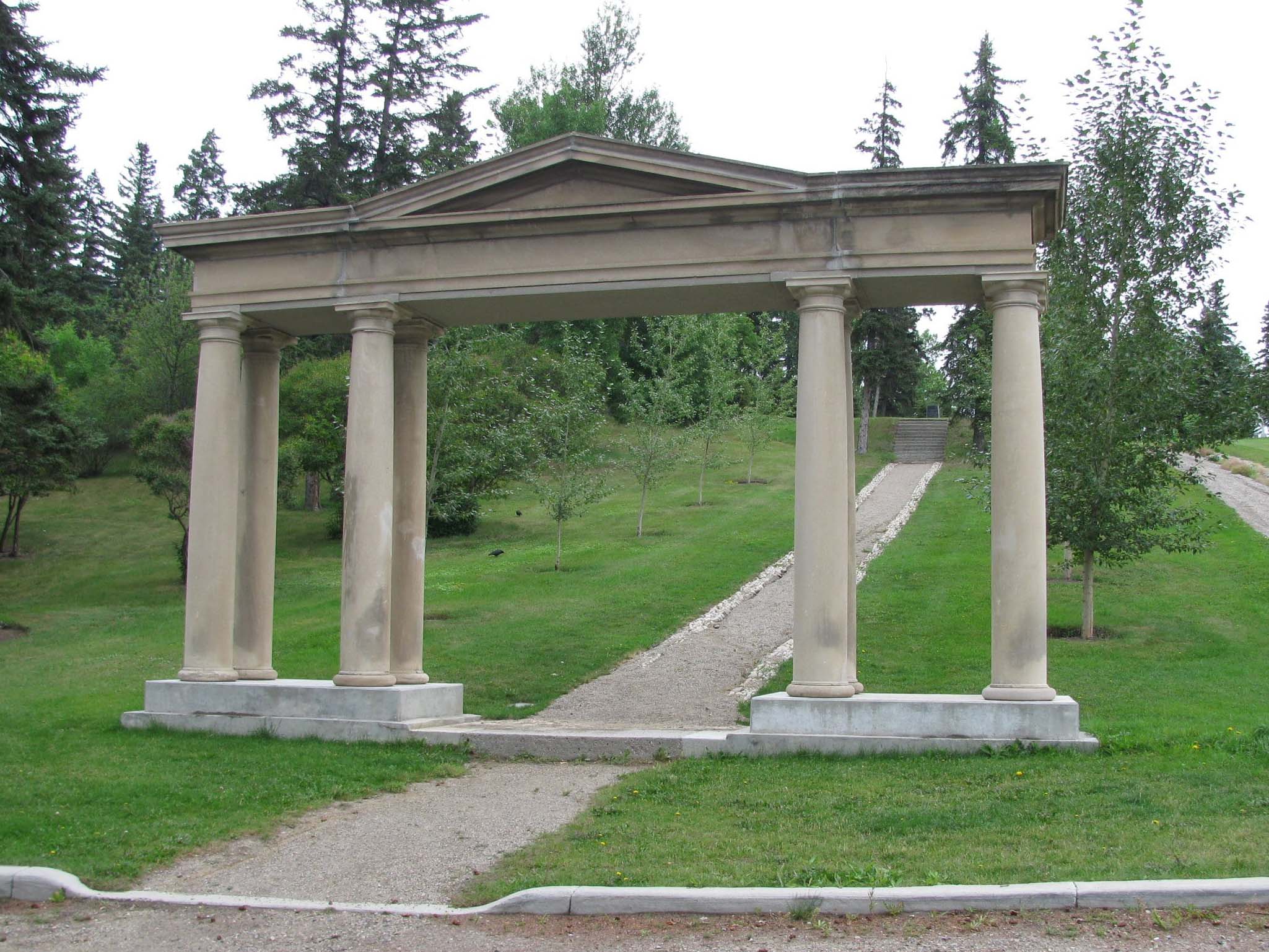 Union, one of Calgary’s oldest cemeteries, was first called “Calgary Cemetery.” At 20 hectares (49 acres) in size, it is located at 28 Avenue and Spiller Road SE, across the road from Burnsland Cemetery.

In 1884, nine years after the North West Mounted Police founded Fort Calgary, the citizens of the newly established town saw a need for a permanent public cemetery. The only existing burial ground was a Roman Catholic graveyard located at the Roman Catholic Mission, with non-Catholics buried in an unsanctified area set aside for that purpose. It was recognized that this cemetery would not meet the future needs of Calgary’s citizens. Outside of the Roman Catholic followers, the general population desired a final resting place for their family members.

An application was made to the Dominion Government of Canada, and in 1885, Ottawa set land aside at Shaganappi Point, then quite a distance outside the town, for Calgary’s first Protestant cemetery. The 50-acre Shaganappi site (now a golf course) was never very popular. In these early development years, bridges were not in place; a cart or buggy carrying the casket often had to be ferried across the river only to return for several more trips to provide transportation to the mourners. Pulling the hearse cart up a steep hill was another arduous task. Additionally, the soil on Shaganappi Point was very rocky and hard, making it difficult to hand dig the graves.

It didn’t take long before a different site was found to replace it. In August 1890, a hill to the south of the city at 28 Avenue and Spiller Road SE was chosen as the site for the new cemetery, and it was named Union Cemetery. This farmland was quickly surveyed into burial plots for immediate use. The first official burial was that of Reverend Angus Robertson, Calgary’s original Presbyterian minister, in September 1890. The lands at Shaganappi Point became Shaganappi Golf Course around 1915.

The land was purchased from Augustus Carney, a local farmer. Carney was the first president of the Calgary Exhibition before it became the Exhibition and Stampede. He was also a friend of Sam Livingston, and both were on the RCMP watchlist because they had attended a meeting about the Metis uprising at Fish Creek, Saskatchewan. Carney sold the city 65 acres of land for Union Cemetery at $70/acre – a lot of money in those days. His farmhouse was at the corner of Spiller Road and Macleod Trail, where he lived while filling the role of cemetery groundskeeper for two years from 1890-1892.

Former town constable Robert Barker, a veteran of the Northwest Rebellion of 1885, became the caretaker of Union Cemetery in 1882, moving into the Carney residence. In 1988, James H. Galloway assumed the caretaker position. Over the next 34 years, Galloway interred some 12,000 bodies, all in hand-dug graves. Barker and Galloway were both buried at Union.

To encourage the relocation of graves from the Shaganappi site to Union, free plots were initially given to those who had buried loved ones there. The cost of a single plot was $5.00, a double plot $10.00, and $2.00 for digging and closing. These charges were quite expensive considering the inconvenience of this location. No bridge existed over the Elbow River until 1905, and funeral carriages had to lurch up and down steep banks while maneuvering the deep and treacherous water. Pedestrian mourners had to wait until a ferryman rowed them across, just a few at a time.

Burials were complicated by Calgary’s unpredictable and harsh winter weather, so in 1909 a mortuary chapel was erected to store sealed coffins. The chapel eased the problem of winter burials in an era when graves had to be dug by hand. Gravesite services could now be held in the chapel, after which the casket would be lowered by an elevator through an opening in the floor to the crypts below. There was a $2.00 charge for this storage with a penalty charge if the bodies were not removed by May 1st when the ground had thawed. By the 1950s, the introduction of mechanical equipment to dig graves eliminated the problem of winter burial, and the mortuary chapel was no longer needed. It has since been used for equipment storage.

Before tree planting began in 1899, Union Cemetery remained much as it had been in Carney’s time – a windswept, barren hill. In 1902 a petition for cemetery improvements was made. The City had already made some upgrades, including a windmill-driven water pump constructed in 1899. The old Carney house was demolished that year, replaced by a brick caretaker’s cottage. The cottage still stands and is used as the cemetery office, workshop and garage.

Union is a typical Victorian cemetery. The cemetery has many unique aspects: a mortuary chapel, a sandstone entrance arch, the James Galloway house, the Quirk mausoleum and the Reader Rock Garden. Many of the markers and gravesites show late 19th-century symbolism and ironwork. The landscaping is deliberately park-like. The beauty of the surroundings can be attributed to Calgary’s first Parks Superintendent, William Reader, whose residence was located at the cemetery’s north end. To quote Reader, “the evidence of death ought not to be allowed to be repulsive . . . can at least be made a monument, in its entirety, to those whose bodies are placed in it.” Today, care of Calgary cemeteries still falls under the jurisdiction of the Department of Parks and Recreation.

The garden surrounding the Superintendent’s residence became both a showpiece for the city and an experimental garden where Reader would test various plant species to see which would survive the harsh prairie winters. The gardens fell into disrepair but have been partially restored, and the north end of the cemetery is now a favourite spot for wedding photographers.

Close to the Reader Gardens (still on the north side of the cemetery) is the old Chapel and Mortuary, built in 1908. It is very unique in Calgary. Due to devastating fires in downtown Calgary in earlier years, a city ordinance required all public buildings to be built of fire-resistant stone. Most buildings of this time period were constructed of local Paskapoo sandstone. The Union Chapel, however, is constructed of blocks of concrete cast to look like quarried stone.

The pews have been removed from the Chapel area now, but otherwise the Chapel remains relatively intact and original. The racks on which the coffins were stored are still in place in the basement, as is some of the original equipment. The Chapel saw its last services in the early 1960s. More recently this building has been used for storage of equipment by the cemetery staff.

As the histories of Calgary and the Mounted Police are forever linked, there are two areas in Union Cemetery (in sections D and S) that are exclusively for the use of the Force and contain monuments to men who were among the original 300 members of the North West Mounted Police.

The majority of the graves area aligned in the traditional east-west orientation with the heads of the deceased in the west. This tradition soon fell out of fashion, and the newer graves at Union do not follow the same geographical orientation.

One of the most interesting sections of Union Cemetery contains no markers. Potter’s Field, an area about the size of four residential lots, contains the remains of about one thousand of early Calgary’s homeless, destitute, unwanted and executed.