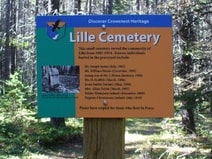 Lille History
In 1901, Charles Remey and Jules Justin Fleutot of the French company United Gold Fields of British Columbia claimed a coal prospect on Gold Creek and established the mining community of “French Camp”. By 1903, the prospect had been developed to include three mines operated by the newly incorporated West Canadian Collieries. With the establishment of a spur line of the Frank and Grassy Mountain Railway to provide transportation, French Camp became the location of the coal processing facilities for the mines. It was re-christened “Lille” in honour of the French town that was Western Canadian Collieries’ headquarters. By 1907-1910, Lille had become a major base of mining operations, housing nearly 400 residents in a community supplied with both waterworks and electricity.

Closure of the Lille mines occurred in 1912. Between labour unrest, increasing production costs and the decreasing quality of the Lille coal, West Canadian Collieries elected to move their operations to more profitable mines in the south, including those at Bellevue and Blairmore. By 1914, Lille was abandoned and its buildings were either demolished or were dismantled and moved to other mining towns in the Crowsnest Pass.

Lille Cemetery
Along the main trail to Lille, about 15 minutes from the townsite, there is a faint path leading to the town’s mysterious cemetery. Little is known about this pioneer graveyard except it is believed about a dozen former citizens and miners were buried at the site. Today, there is only one tombstone still standing. As of 2001, according to a provincial government spokesperson, no one has stepped forward to seek government assistance or funding to preserve the final remnants of the pioneer cemetery.