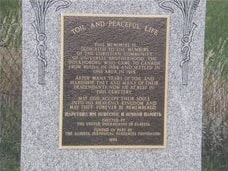 Lundbreck is a hamlet in southern Alberta within the Municipal District of Pincher Creek. It is situated 4 km west of the Village of Cowley and 16 km west of the Town of Pincher Creek. The town’s name is a combination of “Lund” and “Breckenridge”, after Breckenbridge and Lund Coal Company which operated collieries and sawmills here. Lundbreck was incorporated in 1907. The township started out as a coal mining town, quickly growing to a size of about 1,000 people until the coal mines closed, at which time it quickly shrank. In the 2021 Census of Population conducted by Statistics Canada, Lundbreck had a population of 289. A person of note, judge Valentine Milvain was born near Lundbreck in 1904. Milvain was appointed judge of the Alberta Supreme Court in 1959 and Chief Justice in 1968.

This 2-acre cemetery was established in 1915 by the Christian Community of Universal Brotherhood (CCUB) to serve the Cowley – Lundbreck area. After the demise of the CCUB in the late 1930s, the cemetery continued to be used by the United Doukhobors of Alberta. The cemetery is privately owned and actively maintained by a cemetery committee. It remains in good condition. Grave markers are typically plain slate or marble upright headstones, or flat markers set flush to the ground. As of last recording, there are 229 interments at this cemetery.