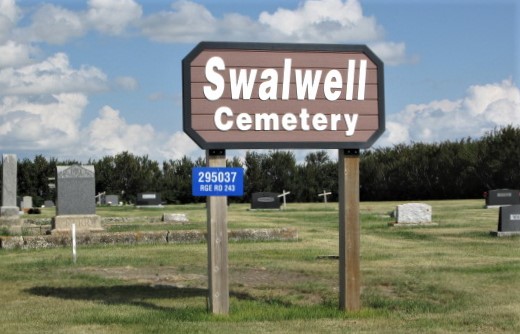 Swalwell is a lovely hamlet in Kneehill County, Alberta, approximately 100 km northeast of Calgary. When the Dominion of Canada opened up the prairies for settlement, settlers had arrived even before the Grand Trunk Railway had completed laying track. Swalwell began life about a mile or so north and was originally known as Rawdonville, Alberta. The railway company moved the town to its current location in 1911, selling lots and changing its name to Swalwell. It once boasted four grain elevators, many shops, a couple of hotels and was the centre of a thriving rural community with a theatre and many other amenities.

As was common with many prairie settlements, the late 1920s and “Dirty 30s” took a toll on Swalwell. In the early 2000s the last of the original buildings on Main Street was demolished. The 2021 census counted a population of 93 souls and 53 buildings in the hamlet proper, plus surrounding rural properties. The main industries are agriculture and oil and gas. A popular fishing hole at the Swalwell Dam is no longer stocked with trout but is still a beautiful place to camp and enjoy the birds and wildlife.

The cemetery was officially inaugurated in 1910 as Rawdonville Union Cemetery, though the first burial had already taken place in 1906. In 1930 the name was changed to Swalwell Union Cemetery, which was again changed in 1978 to present-day Swalwell Cemetery.